This article was written by Nicolò Ferrarese, volunteer of the Regional Civil Service project “Spazi Rigenerativi” in Xena, after the training day at the school of Don Lorenzo Milani in Barbiana.

There are the alarms that I have set for the morning to not miss for any reason the training day with the Civil Service at the Barbiana school.

I woke up inexplicably with the 6.45 am alarm, I even have time to prepare a pocket lunch at to leave calmly. The departure is scheduled for 7.30 am and the place is not far from home, in fact at 7.30 am everyone is already there.

We leave almost on time.

After having crossed the Apennines, in the company of beautiful landscapes and breath-taking views, we arrive at Barbiana and begin our journey (all uphill) towards the church.

A few meters later the “true” path begins, that is the “Path of the Constitution” that will lead to the school. On the path you will find 45 panels containing an article of the Italian Constitution illustrated with drawings by the children of some Italian schools who have collaborated with the Don Lorenzo Milani Foundation. In Don Milani’s teaching the Constitution was always present, according to him it was the basis for building a different society, more equal and supportive, with equal rights, opportunities and dignity for all. 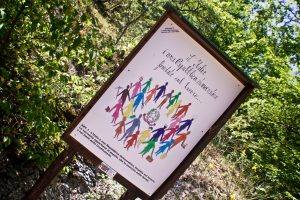 After an hour, or little more, of walking we arrive at our destination. From here, wherever you look, you can admire a breath-taking view, almost exciting in the middle of nature, peace and calm. The chaos of the city, urban pollution and the telephone signal are very far away.

As soon as we arrive at our destination, we find Palmiro that welcomes us and shows us some points where we can have our pocket lunch and be able to recover from the climb.

Once the break is over, we begin the visit. The first thing that Palmiro decides to show us is the swimming pool, built by school children with the help of some parents. It was strongly desired by Don Milani to teach children to swim, and to break the fear that the mountaineers of the force of water have.

Later, even to protect us from the scorching heat, he lets us enter the small church where we find only the bare essentials. A few benches for the worshippers, the altar, a lectern and a confessional. Nothing too opulent, unlike many other city churches.

Even the stained-glass windows and the rose window were made by boys and girls themselves, after they learned the art of glass mosaic during a trip to Germany.

Then he takes us to the classroom of the school where we could breathe a different air, almost austere, of profound respect, and of authenticity. We find geographic maps made by hand, the study of the Italian parliament, the pyramid of scholastic selection, the formation of the Republics in Europe, the universal conquest of the vote, the astrolabe built by the boys, “I CARE”, “Mi importa” hanging on wall: the exact opposite of the fascist motto “I do not care”, among other things became particularly in vogue these days. 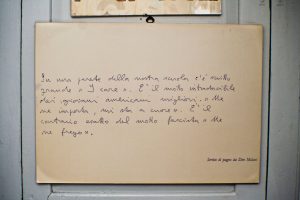 Another stop is the workshop and the forge of the school. Here the boys and girls built all the objects they needed for school and home. Palmiro tells us that little by little the workshop became a central point for Barbiana. When some tools to work the land or the carts broke, the peasants went to the boys and girls asked to fix them.

Last stop of the visit, the small cemetery of the town where the tomb of Don Lorenzo Milani is located. Here we discover that Palmiro was not one of the students of the school, although he could read in his eyes and in his voice a perpetual emotion when he spoke about it. He came to Barbiana for personal reasons, and when he fell in love with the place he decided to stay, became part of the foundation, and became a great friend of one of the school’s students and co-founder of the foundation.

It is incredible to think of the influence of Don Milani on Palmiro, even though he never met him, he lived it reflected by his students who had become elderly, but still students of Barbiana.

Before going for the way back, we are divided into three groups and we are asked to answer three different questions, our group is asked specifically “To whom would Don Milani teach today?”.

A correct education to respect others and to oneself, to have curiosity and not fear, to want to experiment and not fear to make mistakes, to reason with one’s own head and not blindly follow the thought of others, this is what he would teach Don Milani.

So, after some reflections we came to the conclusion that today he would be more interested in transmitting his method, of inclusion and acceptance of all, with the only requirement being the desire and the will to improve ourselves and improve the context that is around us. In practice, he would teach a method to those who for work and profession already teach, in a manner consistent with the features and facets of today’s society, with the aim of reproducing what it has done with its class on a larger scale.

The revolution starts from the young, and that is why we need to revolutionize the educational method, changing the school and its interpreters.

“To have the courage to tell young people that they are all sovereigns, so obedience is no longer a virtue, but the most subtle temptations, that they do not believe they can shield themselves before men or before God”

We use cookies to make sure you can have the best experience on our site. If you continue to use this site we will assume that you are happy with it.Ok